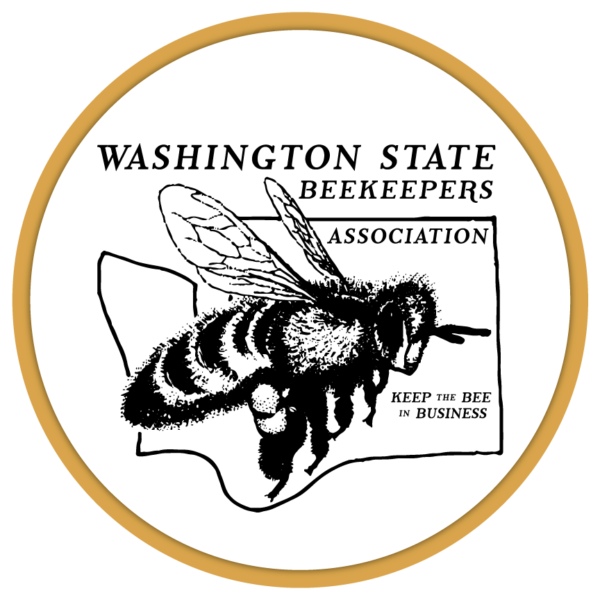 BEEKEEPER OF THE YEAR 2021… RUTHIE DANIELSON! 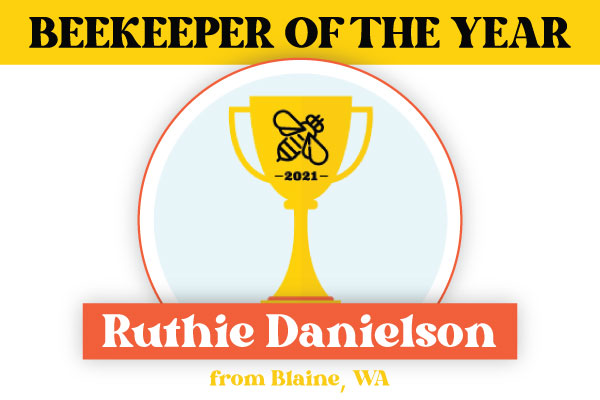 Nominated by Dorothy McFall of the Mt. Baker Beekeepers Association:

The hobby of beekeeping tends to attract many selfless people who are willing to go an extra mile for the sake of others; Ruth Danielson from Blaine, WA, perfectly exemplifies this.

Ruthie is a beekeeper in Whatcom County who owns a couple handfuls of well kept colonies. Her beekeeping habits are neat, organized, and always well planned out. If you were a bee, Ruthie’s apiary would be one you would like to reside in. Ruthie has a great love of bees, a great respect for humanity, and this has propelled her to take a bold stand against a new threat that has arrived on U.S. soil.

Washington State grabbed national headlines with the introduction of the invasive Asian Giant Hornet. The hornet that threatens the Western Honey Bee and the public health at large captured the concern of the world. When Ruthie realized that the Asian Giant Hornet was discovered in Whatcom County where she resides, she jumped into action. Ruthie quickly and efficiently whipped up a task force under the Mt. Baker Beekeepers Association. She organized eradication efforts and spearheaded trapping through the Washington State Department of Agriculture. Ruthie distributes trapping materials, maps trap locations, and coordinates all the eradication efforts. She also continuously reaches out to the public to create awareness of the Asian Giant Hornet by meeting with land-owners and making endless phone calls. A portion of her tireless efforts can be seen in the recent documentary “Attack of the Murder Hornets”.

The first Asian Giant Hornet Nest discovered in the United States has been referred to as “Nest Zero”. Nest Zero was previously owned by a private citizen. Since the Nest has great historical and scientific value, various organizations (including the government) wanted the nest, but none were successful in obtaining it. The historical and scientific communities were heartbroken. After everyone else failed, Ruthie Danielson met with the owner and miraculously was able to acquire the nest. Once Ruthie rescued the nest, she immediately turned it over to the government. Scientists from all over the country were overjoyed that they could continue their research. Because of Ruthie, the scientific community now has detailed information about the Hornets, such as diet, nesting material, and nesting behavior. The nest is now being preserved as a historical piece, and it will soon be put on display at the Smithsonian Museum in Washington D.C.

Ruthie proved the extent of her own devotion to public education at this year’s Northwest Washington Fair. She worked at the Beekeepers booth for 13 hours a day, for 10 days straight; a commitment she made on behalf of the bees. Ruthie is keenly aware that public awareness and education is key to successful eradication. There are few who would be willing or able to go to such lengths.

The Department of Agriculture is thrilled to work with such a motivated individual to help organize ‘the boots on the ground’. Sven Spichiger, head entomologist of the Washington State Department of Agriculture, has referred to Ruthie Danielson as “an inspiration”; Dr. Samuel Ramsey, a bee pest expert who has been following the Hornet eradication efforts, referred to Ruthie as “a hero”. Everyone who is aware of Ruthie’s efforts is aware of her ‘no problem too big’ attitude.

A statement that Ruthie makes in the “Attack of the Murder Hornets” documentary is a fitting mantra, “I’m just a regular person who cares.” Bees are lucky to have such a tireless advocate.

Attached are some links about the amazing and unique accomplishment this beekeeper has made for our bees, community and the world of science: